I have, with all the pain it gives, to tell you that James (Eve Hallow") passed away. Words are a bit missing, but he'll stay in our hearts... Rest in peace my friend, we'll miss you
Posted by Tonton De Pouget at 00:59 No comments:

She was a beautiful young girl who’s life was unfortunately to become a plaything of the chaos gods. Born blind, she learned how to survive, being a resident of the far flung planet of Null, lying on the outer most reaches of known space. . .

The girl had the misfortune of wanting to travel amongst the stars, Null is a frozen planet and entirely hostile to live on and so it was with the mind of seeking a better way of life that the girl stowed away on a merchant vessel. . .

The vessel unshielded as it was fell pray to the creatures of the warp, the girl’s fate however was decided by the chaos god Slaanesh, the god saw something in her divine beauty, and decided to make her his plaything. . .

Knowing nothing of the universe apart from the planet Null, being as it is completely blank to the warp for reasons unknown, the girl had no concept of other such beings, thus it was that Slaanesh was able to take her and mould her in his image without any concept of this event being known to the girl. . .

Father Nurgle learned of this beautiful creature who now, albeit unknowingly served Slaanesh, with the knowledge of the girl, father Nurgle took it upon himself to steal the girl away from Slaanesh, jealous as he was of the girl as a plaything. . .

To deceive the girl, father Nurgle sent a plaguebearer to visit her, under the influence of a powerful glamour, the daemon appeared to her as an elderly woman, bearing a lantern, this she told the girl would light the way and allow her to see, even though she was blind. . .

All that the elderly woman asked of the girl was that she picked an almighty flower for her, knowing not of her transformation or the true identity of the old women, the girl reached out with a claw and picked the flower, in fact, she had just removed the head of the plaguebearer. . .

It was at this point that father Nurgle’s plan came into fruition, the girl picked up the lantern as promised by the elderly woman, even as she did, the corruption of father Nurgle started to spread through the lantern and through her claw arm that had just removed the plaguebearer’s head. . .

It is to this day, that she wanders on the frozen planet of Null anathema to daemons as it is, her own complete lack of awareness of her true nature shielding her from this, her lantern, cruel a bell of plagues in reality, guiding her through her dark world and lighting the way for this unfortunate puppet of the dark gods. . . 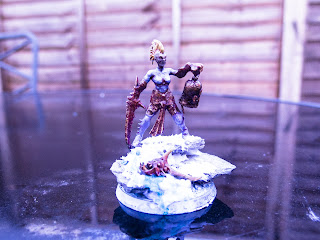 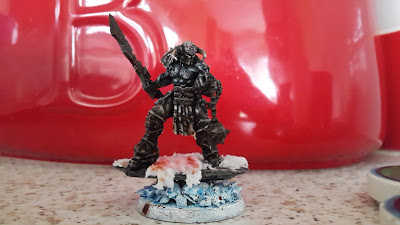 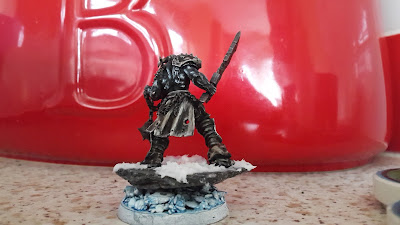 I promised I'd upload a photo of this little lady from my Golden Demon attempt for this year so here she is. . . 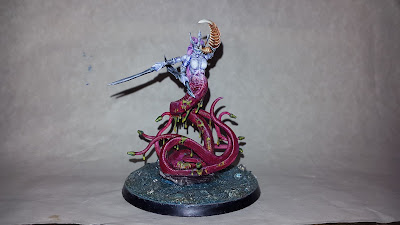 Hello All,
I've been absent for a while but now I return with a new Warband.
The Hounds of Norsca:- 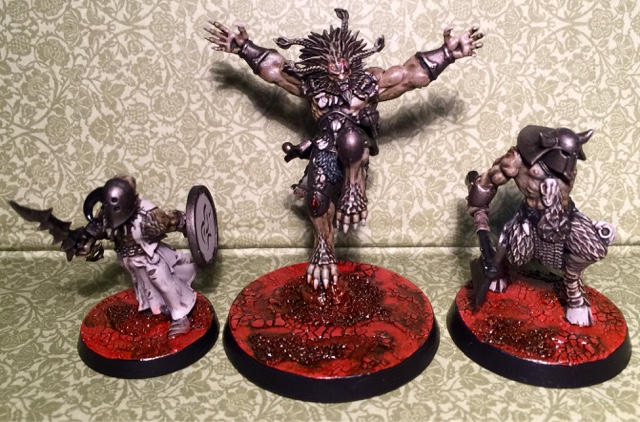 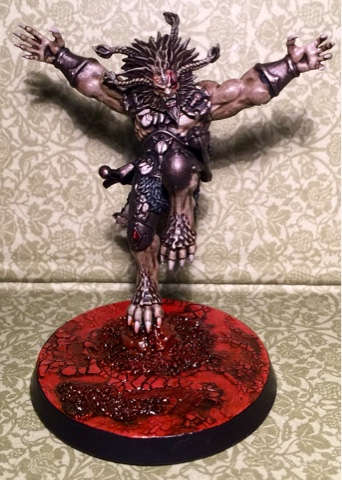 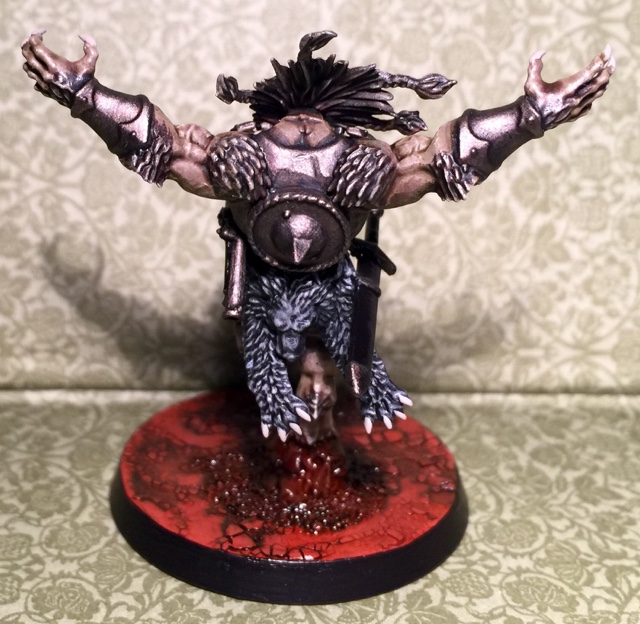 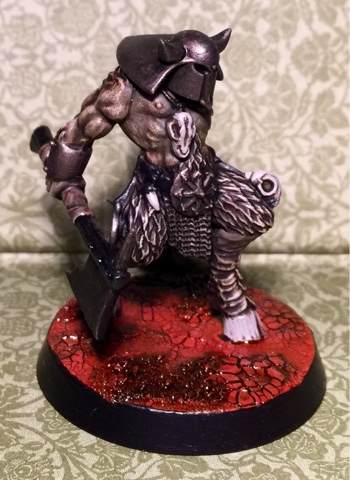 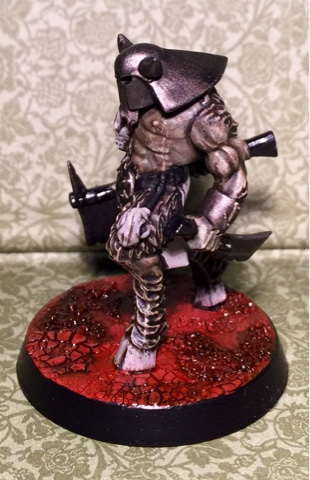 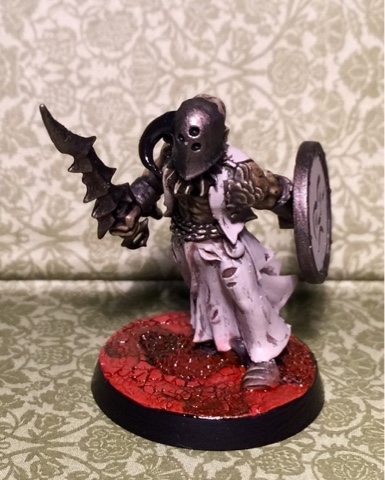 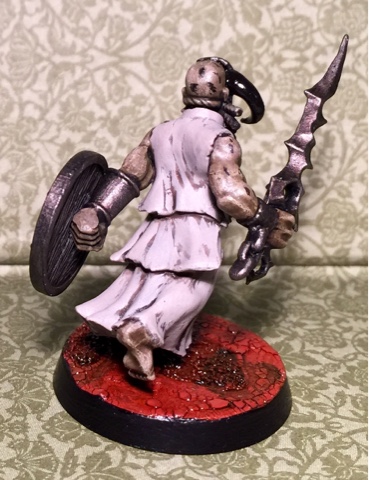 A Wulfen Pirate, a very Harryhausen inspired beastmen deck hand and a blind slave.
Monochromatic is what went through my mind creating these. Simple, quick and dirty.
Let me know what y'all think.
Till next time,
Eve.
Posted by Eve Hallow at 21:58 4 comments:

Golden Demon has been and gone for another year for me. . .

I entered for only the third time with a miniature that I have previewed on here before.  Alas I didn't have any luck this time around, but feel that as a learning experience it was invaluable to me, especially with my understanding of where I need to reach with regards to my painting skills. However this I feel is far from unobtainable for me and I will be entering next year with multiple models in mind.

I will update this post shortly with a photo of this year's entry and I will attempt to share my progress throughout the year in both Fantasy miniatures on here and 40k and 30k on my own blog at KrokodilTears.blogspot.com . . .

On my way for skulls, a path to glory chronicle

Hi ! As usual, Games Workshop and The Black Library offer some nice stuff around Christmas in The Advent calendar . And this year, I was really pleased to see some old rules adapted to the Age Of Sigmar : The Path To Glory (Still avaible here).

I can't renember exactly when, but I think the rules were published in some White Dwarf issues in the early 2000 (?) . 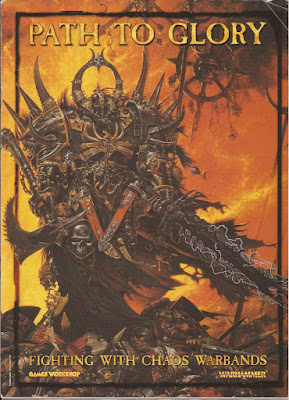 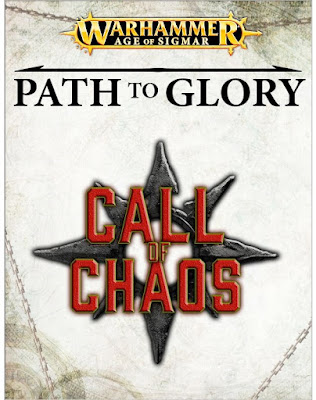 And the new one, less attractive, but the main one is in the content

One other point, and not a small one, is the new GW "Lowcoast" boxes : 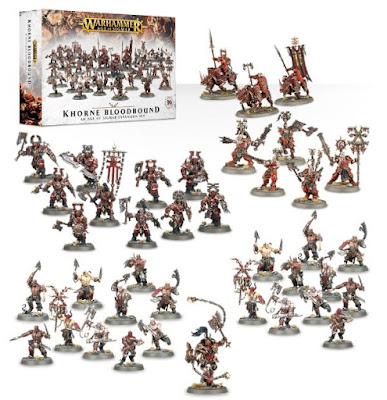 And the last point... what some friends began to do with the Chaos goodies showed in the excellent "The Convertorum" from my friend Johan... Both Jeff Vader (Nurgle), Nordic (Tzeentch), Alexander (Slaanesh) and of course KrautScientist (Khorne) started some awesome warbands ! Please treat yourself to Chaos and have a tour here or here to admire their creations. And don't forget to keep an eye on Tommy's excellent blog to see his impressive warband.